So you just received a copyright claim on your YouTube video 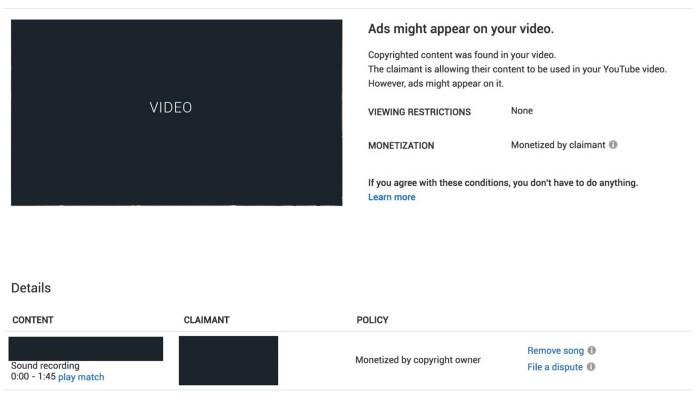 Don’t panic. There are a couple reasons why this might have happened.

*Note, this post doesn’t cover takedown notices. You can read more about that here.

If that second situation applies to you (the claim states that you’re using a piece of content in your video which simply does not exist in your video — your video features your grandpa telling a story from his youth, but the claim states you’re using that new Justin Bieber single), you should dispute the claim. Frustrating? Yes, of course. But solvable. Since the copyright claim is completely false, 100% not true, and you can prove it, go ahead and dispute the claim explaining that the claim was made in error (more info on how to dispute a claim here). It should be removed from your video.

Let’s assume you used somebody else’s song or music in your video.

For sake of example, let’s say you used a song that you just personally like, say the new Grouplove or Sia single, in your daily vlog because it made your video look and sound awesome. In this case, the copyright claim is valid. Why? Let’s dig a little deeper.

Every song has a least one owner, but more often, multiple owners. First, there are the individuals who wrote the song and control the composition (the people who wrote the lyrics as well as the track itself). Then there are the individuals who own the actual recording of the song, the master recording. These people are often either record labels or the artists themselves. 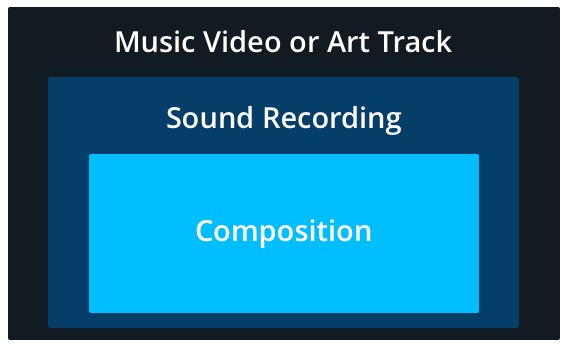 Now let’s say Emma gets signed to a record deal and she and Joe write another song called “Square,” which will be released on the label (since they are paying for the recording, mastering, distribution, and promotion). In this case, Emma and Joe still share ownership of the song’s composition, but the record label most likely has ownership of the master recording.

Now back to your copyright claim.

Ok, now that you have a basic understanding of song copyright ownership, let’s get back to your copyright claim (I know you’re anxious to figure out what to do next).

Depending on the song and artist you featured in your daily vlog, one of the copyright owners of that song has identified the usage of their song in your video. This is not necessarily a bad thing. The writers, artist, or record label for the song have invested their time and money into making this awesome song that you love and want to share with your friends and followers. Because they own it, they can decide what to do if someone uses it in their video.

It’s most likely that the copyright owner of the song in your video has decided to monetize your video, meaning that you, as the uploader, can no longer monetize the video yourself. And because you don’t have the permissions or license to use the song, that’s a pretty fair deal (more on getting permissions and licenses in a bit).

Some other copyright owners are a bit more aggressive and decide to block your videos in certain territories (sometimes worldwide) or on certain devices (some record labels might block videos on mobile devices), and in extreme cases, decide to remove your video completely (that’s known as a takedown notice, which is an official legal action and results in a strike on your YouTube channel). BUT, assuming you received a “monetize” claim, your video will still be viewable by your followers and your channel is still in perfectly good standing on YouTube (you can check what type of claim you received on your own video when you’re logged in to your channel and navigate to https://www.youtube.com/my_videos_copyright [or click on Copyright Notices from your Video Manager], then click on Includes copyrighted content for the video in question).

The same logic applies to if you used someone else’s video content in your new video. So assuming you featured a clip of Rihanna’s music video or that great scene from The Office in your vlog, the copyright owners of those video assets have identified the usage of their footage in your video and are claiming it because it is theirs to claim.

“But I gave credit in the description!”

I know, I know. I hear and see this a lot, but to be honest, that just doesn’t cut it. You may have the best intentions in the world, but simply giving credit doesn’t allow you to just use the content.

To be able to share this great song in your videos, you will need a license to use it. Not simply some email from the singer of the song saying “yeah, it’s ok! Go ahead and use it” (remember, unless that singer owns the song from top to bottom, from completely owning the song’s composition AND master recording, this “handshake agreement” isn’t enough). You’ll need permission by means of a license agreed to by EVERYONE who has copyright ownership in the song.

In terms of songs specifically, you’ll need to secure what’s called a sync license. This is a contract that details what song you’d like to use in your video, the owners of that song, how you’d like to use the song in your video, and the exchange that takes place for you to be able to use it (are you able to use the song in exchange for a fee? In exchange for promotion?). Here’s a link to a sample sync license for reference.

How to get one of these fancy, sync licenses? Well, if you’re doing it yourself, you’ll have to contact ALL of the copyright owners of the song to arrange the deal. Then each of them will have to agree to the terms, your agreed-to exchange will take place (ie you pay them the fee), and all parties sign the document, including yourself. At that point, and at that point only, will you be able to upload your video featuring that really awesome song in your video without worry.

Now, there are some websites which handle the sync licensing and paperwork for you (phew!). If you license music from a production music library or from a music catalog, a lot of this paperwork and emailing is handled directly with the site, making your life a lot easier. Just find your song, purchase your license, and you’re set!

But WAIT! You still receive a copyright claim on your video. I know, you’re thinking, “are you kidding me right now.” But I’m not. This happens all the time. It’s frustrating, especially since you’ve done the pre-work and made sure you had the proper permissions to use the song and just want to share your vlog.

See, what happened here is the copyright owner of that master recording probably still has his song running in Content ID, finding out where his song is being used on YouTube. That copyright owner (or the company who’s admining that song on YouTube on the copyright owner’s behalf), doesn’t have a way to tell his licensing company that you specifically have a license to use his song and that your video should not be claimed.

So, what do you do? If this is your situation, your best bet is to dispute the claim providing reference to your license agreement in your dispute and to contact the company through which you received your license (if this was done directly with the record label or artist, go ahead and contact them). If all goes according to plan, the claim should be released and monetization on your video will be restored (and any monies earned while the claim was in a “dispute” status will be paid out to you, as well).

If your video contains a song, but you believe the usage qualifies under Fair Use, that’s a whole other topic which I won’t go into in this post as there’s a lot of grey area. I’ve included below a few great resources I suggest you check out if you think your video qualifies for Fair Use:

So to recap: You received a claim on your video and:

“This whole process sounds like a lot of work.”

Yeah, I know. It is. I’ve see the painful back-and-forths, the 20 email long thread with managers and artists and labels and publishers, the expensive license fees required by companies, the claims on videos even though you have permission, and… it’s pretty terrible, if we’re all being honest here.

That’s why at Thematic, we’ve made this process simple, safe, and free for creators such as yourself.

It’s simple, because we handle all of the sync licensing for you. All of our songs are pre-cleared and ready for you to use in your videos so you don’t have to worry about tracking down and emailing back and forth with the copyright owners over the course of a couple weeks. We think you should be spending your time creating and sharing great content, not drowning in paperwork.

It’s safe, because you will not be claimed for using the music. Seriously. We’ve developed our platform so that your videos remain claim-free so long as you include the provided artist promotion in your video post. We want this to be as frictionless for you as possible.

And lastly, it’s free. Completely free. We don’t believe creators should be charged antiquated, expensive rates to use 45 seconds of a song in their video. You’re getting the word out and helping provide exposure and reach to artists who are looking for just that.

It’s a win-win for everyone involved and we’re excited to provide this tool for creators like yourself.